Darkest Dungeon is a mission based dungeon crawler with heavy RPG elements. Screenshots don’t really do it justice, apart from making it look it’s going to be bloody hard. And to be fair, visuals aren’t Darkest Dungeon’s greatest asset. It’s very hard to tell how good it is from looks alone. 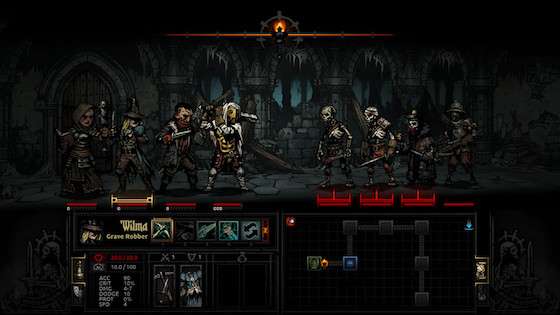 Darkest Dungeon is cruel at first. It looks like a standard dungeon crawler: but if you try and play it like one, it’ll tear you apart. In a game like XCOM, which also has the “send people out on missions” structure, losing a mission is catastrophic and so is letting characters die. In Darkest Dungeon, they literally could not give a shit about your characters. New characters gain quirks, good and bad, with frightening randomness. That guy you spent thousands on could turn out to have really had problems a few quests down the road. It’s probably worth ditching them.

Combat is savage and enjoyably strategic. Every battle - wrongly handled - could end up in a complete wipe of your team. That doesn’t mean it’s necessarily hard, but it means that there is always some level of pressure on you to think carefully. It reminds me somewhat of Dark Souls - failure is expected, and frequent, but not as catastrophic as you might expect. The failure itself matters less than how well you rebound from it.

I’m enjoying Darkest Dungeon a lot, but after a good 10-20 hours, the game has started to feel quite grindy. The first couple of hours are incredibly frustrating, but it does get much better - as long as you are willing to put in the effort to learn how the game works.